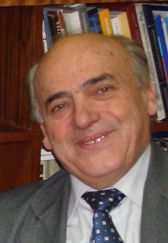 Prof. Hristo Radev was a longtime chairman of the International Scientific Symposium “Metrology and metrology assurance”, founder and scientific supervisor of the Research and Development Laboratory “Coordinate measurements in Mechanical Engineering”, President of the Union of metrologists in Bulgaria, President of the Bulgarian Academical Association of Metrology, honorary lecturer at South Ural State University, member of the General Council of IMEKO, foreign member of the Russian Metrological Academy, academician at the Academy of metrology in Ukraine and foreign member of the Engineering Academy of Ukraine.

Prof. Radev is the author of significant amount of scientific, research and development projects, patents, papers, books and handbooks dedicated to mechanical engineering measurements. He has been a supervisor of over 10 PhD students and dozens of graduates. He is also the author behind the three volumes of the handbook “Metrology and measuring instruments”. Prof. Radev has been honored by Technical University of Sofia with golden medal for his work as a lecturer and researcher.

Prof. Hristo Radev will be remembered for his erudition and inexhaustible enthusiasm. Thanks to his efforts the International Scientific Symposium “Metrology and metrology assurance” reached new scientific heights and received international acknowledgement.